Craig “Bluto” Baker is a 30-year U.S. Air Force veteran, who recently retired as a Brigadier General. He is a command pilot with multiple combat tours and has directed operational updates, training, and requirements for F-35, F-22, and F-16 aircraft. In his role at Shield AI, Bluto will lead the company’s U.S. Air Force strategic efforts to continue transitioning Shield AI’s Hivemind, the world’s best AI pilot, to current and future DoD aircraft.

When people talk about serving in the military, a concept that always comes up is “being part of something greater than yourself.” The opportunity to work at Shield AI delivers on this same idea, but it also delivers an opportunity for me to be part of something that has literally never been done before. That’s why when my West Point roommate reached out to me to see if I wanted to join him on Shield AI’s strategic engagement team, I simply couldn’t pass on the opportunity. Shield AI has a unique opportunity to be THE leaders in defining state-of-the-art for the future of aviation; as a career warfighter, strategist, and innovator, it’s simply a perfect fit.

During my Air Force career, I flew multiple airplanes as an Air Force fighter pilot; I had a “moonlighting job” as a target weaponeer; and I was a leader in operations, strategic planning, and tactical execution. I’ve built a reputation as a strategic planner and executor of major projects, and I intend to apply these same skills to my work at Shield AI. This company already has a strong and compelling strategy; my experience as a senior Air Force officer will enable me to detail the roadmap of where the company needs to go to be successful. I’ve been removed from the military for more than a year, so it’s great to be able to jump back into discussions around how industry leaders like Shield AI can support the DoD — especially at Air, Space and Cyber this week. 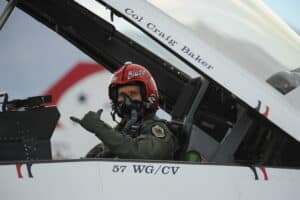 When you look at military aviation and where its gaps and vulnerable seams are, all roads lead to AI and autonomy. Full-scale fighter jets equipped with autonomy and AI capabilities deliver persistent aerial dominance over the battlefield. What Shield AI has developed for the Nova quadcopters and V-BAT are excellent assets and capabilities, but nothing bestows the U.S. and allies with the ability to control the narrative of warfare like full-scale jet aircraft.  We had freedom of maneuver during all those years fighting wars in the Middle East, but when you consider the threats posed by the PLA and other adversaries, military aviation capabilities must evolve with AI and autonomy at their core.

Swarming is an incredible tactic that has come alive for the Air Force in the last few years. The logic is simple: aircraft often need to be able to hide, but not all aircraft are stealthy (and even stealth aircraft are vulnerable to some things.) Whether it’s hiding from visual, audio, or radar detection, uncrewed autonomous swarms are a tactic that compliment these capabilities. There is always going to be “uncrewed versus crewed” debates, and I do think there will be a human in the loop for at least a percentage of efforts, but it would be difficult to find an Air Force leader who would argue that autonomous swarms are anything but a must-have for the DoD to be able to successfully deter adversarial activities.